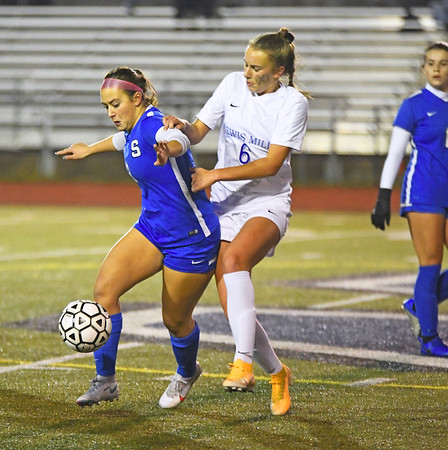 SOUTHINGTON - The Southington girls soccer team closed out its 2020 season with a win in the final of the CCC Region B postseason, capping off a journey for many of the team’s seniors that started long before their first day of high school.

Playing on the same travel and club teams since as early as fourth grade, the Blue Knights’ 11 seniors are saying goodbye to many of the only soccer teammates they have ever known. Coming off of a state championship appearance last year, Southington planned on having higher expectations under the guise of a traditional season, but used that drive to go undefeated in a shortened, localized schedule due to the covid-19 pandemic.

“Even though everything was everywhere and we couldn’t play the harder teams, it was still a great year regardless because we were all seniors, we were all with each other all four years and even before that,” senior goalkeeper Emily Eigo said after the team’s win over Lewis Mills in the Region B championship round on Friday. “We’re all really close and it was still a great year regardless of not being able to travel as far.”

Southington head coach Mike Linehan started coaching many of these seniors before they were in high school as well, so seeing this group close out their high school careers on a high note was important to him.

“This group only lost I think four times their freshman year, we lost once in the sophomore year and an undefeated regular season the last two,” Linehan said. “To finish this year with this type of victory, kind of ends this four years for them and puts definition to how well they’ve played.”

The Blue Knights allowed just five goals all season and were only scored on in four games en route to their 14-0 finish. Outscoring opponents by 59 goals this year and never scoring fewer than twice in any contest, what was originally set up to be a season of destiny quickly became a season of destruction.

“The mindset was that we go in to win,” senior Shannon Litchfield said. “No matter what it is, we’re just going to play our hearts out and go for the highest that we can go, and we did that.”

Litchfield netted four goals in her final match wearing the Southington blue to give the Blue Knights a 6-0 win over Lewis Mills. It was their eighth win of the season in which they scored at least five goals with six of those victories coming in shutouts.

Coming off of a 3-1 win over Bristol Eastern in the first round of the playoffs that did not yield an entirely satisfactory performance, Southington was determined to finish this season off the way it wanted to and scored five times in the second half.

“We didn’t play as well as we wanted to in the last game, but this game we stepped it up,” Eigo said. “We had a great warmup and everyone was in it and we just played really well and connected all our passes.”

Regardless of anything that happened on the field this season, every single person involved was simply glad to have this opportunity. Expectations and unfinished business from previous season feel far less grave when the only goal becomes getting on the field.

“It’s a blessing we were even on the field and we recognize that,” Linehan said. “I truly believe that because there’s a lot of sports that didn’t get that opportunity. Look at football, and look at the [winter] sports. For us to be able to experience this, because I think high school sports teach you a lot, it’s not just about the game you learn about on the field. Every time we stepped we thought it was an overall blessing just to be here.”