'Everyone tries to find a way to get in and watch the game': Family, friends, fans of student-athletes doing everything possible to watch high school games despite pandemic restrictions 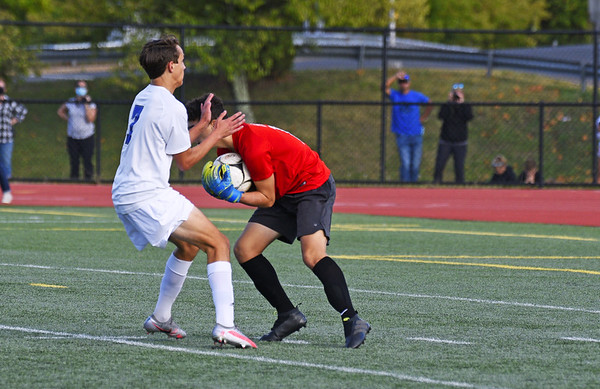 The New Britain boys soccer team helped welcome back high school sports earlier this month with a home game against Southington, and while the first high school game since March 9 drew a solid crowd, the majority of the spectators took in the match through the tall chain-link fence surrounding Veterans Stadium.

New Britain, along with every other local high school, are not allowing visiting fans into games this season due to covid-19 precautions, leaving parents and family members of student-athletes searching for ways to still watch their loved ones compete.

On opening day in the Hardware City, Southington fans parked in their usual spots outside of the stadium, but instead of going through the entry gate and into the bleachers, followed the outer fence along the track toward the far side of the field and gathered near the visiting bleachers on the south end of the field, next to the net where the Blue Knights were shooting for the first half. It wasn’t a bad view, aside from the obstruction of the fence, but in the second half, when Southington shot at the other net all the way across the field, the view became much more obstructed.

But in a season like this, parents are taking whatever they can get.

“It’s not how you want it to be, but at least you have something where you can see it and don’t miss anything,” said Lisa Burdette, mother of Southington senior Cooper Burdette. “We don’t want to push the envelope and have the season stopped because there are parents somewhere, but it’s really hard not to watch.”

Many others have filed into the same spot at Veterans Stadium through the season so far, gladly electing to stand away from the field for two hours while still being able to watch their children play.

“We've had a lot of people come to the gate from opposite teams and we told them how the league policy is there are no visiting fans,” New Britain Athletic Director Len Corto said. “But they're welcome to park in the lot and stand by the gate or sit in their car and watch from the parking lot, which quite a few have taken us up on.”

Similar sights can be seen at high school fields across the local area this season. Over at Southington’s Fontana Field during the Blue Knights’ girls soccer game against Farmington last week, visiting fans made the walk across the tennis courts alongside Pleasant Street and peeked in through the chain-link fence in the lone corner of the court that offered a break in the thick pine trees that otherwise obstructed the view entirely. The courts, which are open to the public, had other fans further down at the end of the tree line, where an obstructed view of the field was available. Any place with a view of the field that is still considered public property is being taken advantage of if it means getting to watch just one more game.

Some fans and parents settle for the distant views, while others try more extreme measures to make sure they don’t miss a play during a season that has already been shortened to 12 games due to the coronavirus pandemic that has resulted in the current spectator regulations.

“My mom tries to sneak in everywhere she goes, but it doesn’t work,” Southington’s Maya Wroblewski said with a laugh. “But it’s good to see the parents over [on the tennis court], because they really want to watch their kids play, and it’s good that they can see them and still be distanced during a pandemic like this.”

This season, each home team has staff or volunteers positioned at the front gate, lists in hand that show which family members are signed up to attend that game. Anyone who comes up to the gate is checked to make sure they are on the list, though some local parents have admitted to waiting until the front gate is vacated later in the game before sneaking inside and watching from the bleachers, socially distanced from the rest of the fans. Others have decided not to test the restrictions at all and have settled for watching via the live streaming options that many teams have started up for this season.

But for most parents, it’s hard to replace the experience of watching their kids in person, especially for those who are trying to support a child that is playing competitively for perhaps the last time.

“It’s my daughter’s senior year, so this is it,” said Jolene Lusitani, mother of Bristol Eastern girls soccer senior Annabella Lusitani. “I get to as many games as I can because the season isn’t what it used to be.”

For the Lancers, the playing field has been moved to the grass area in front of the school due to maintenance on the turf field. This has limited seating to just the line of parking spots in front of a wooden barrier that stretches the length of the field, which fans aren’t allowed to cross. Many back their cars into those spots and watch from their trunks, but spots are limited. Only about 50 people were on hand for Tuesday’s Bristol Eastern and Bristol Central boys soccer game, a rivalry clash that typically packs the house with both home and away fans.

“It’s difficult when they’re away playing a good team and you can’t be there to support them,” said Filomena Gilbert, mother of Bristol Eastern girls soccer sophomore Cecilia Gilbert. “The athletes feel that, and as parents, you feel bad because you can’t support them. But it is what it is. At least they’re getting in a season and getting some games in, but it’s very stressful for parents.”

It’s particularly stressful for Filomena, who has a compromised immune system and is forced to watch in a secluded area by herself, though that doesn’t stop her from getting to every game she can, both home and on the road. At home games, she’s always able to point out the visiting fans who try their best to blend in and support their kids without calling attention to themselves.

“When they sneak in a cheer, you’re like ‘hey, what are you doing here?’” Filomena said with a laugh. “But I think overall, people are mostly trying to follow the rules as best they can. But it’s like what do you do at a yellow light, stop or go?”

It’s that yellow light and grey area that visiting fans have tried to feel out since the season began. Over in Plainville, during the boys soccer game against rival Farmington, visiting fans parked their cars along the side of the road and watched through the black barred fence, while one family of five, all in masks, piled into the bed of their truck for a view from above the fence. The aesthetic is certainly unique, seeing more fans outside of the gated area than in the actual bleachers, but it has become a typical sight for this atypical season.

In Meriden, when the Newington boys soccer team played against Platt, fans parked their cars along the street overlooking the new turf field and popped their passenger windows open to take in the game through a light rain. The next day, at the Clem Lemire sports complex for Newington’s girls soccer game against Berlin, parents popped open the trunks of their SUVs and sat inside with umbrellas to fight off the relentless rain that lasted through the entire contest. Some fans, like Berlin’s Scot Wenzel, have taken in games from as far back as 50-100 yards to make sure he’s still there to support his three kids, including Redcoats senior Ashley Wenzel.

“It's a tough situation,” Scot Wenzel said. “As parents, we just want to watch our kids play, so it's tough when you're not able to be there and support them. It's Ashley's senior year and I also have two other kids in the program. I love watching my kids compete and that's something I don't want to miss out on.”

Sometimes, there’s no choice but to miss out on a game, like Berlin’s game against Middletown on Thursday, where there was no in-person viewing option for visiting fans. But parents like Scot reach out to other parents in surrounding areas to learn of any good spots to view an upcoming game, and no matter how far away from the field it is, if it’s in sight of the game, it’s a good option.

“I just feel fortunate that they're playing and that I'm able to watch,” Wenzel said. “I don't care if I'm on the field or 50 yards behind a fence. If I'm watching them, I feel fortunate with everything going on in our world today.”

The views are hardly perfect, and often obstructed, but visiting fans have prioritized supporting their loved ones, whether it’s from the back of a truck, behind a fence or in the pouring rain. Some have bent the rules, a few have broken them, but all have agreed that if there is a way to cheer on their children, they’ll find a way to do it, and to make the experience for the players as normal as possible during a time where normal is a rare commodity.

“Whatever day I can get here, I make sure I go,” Jolene Lusitani said. “The more people you have screaming and yelling, the more amped up you get, so it’s definitely changed for them, and also the parents, especially parents with seniors. This is it for us.”