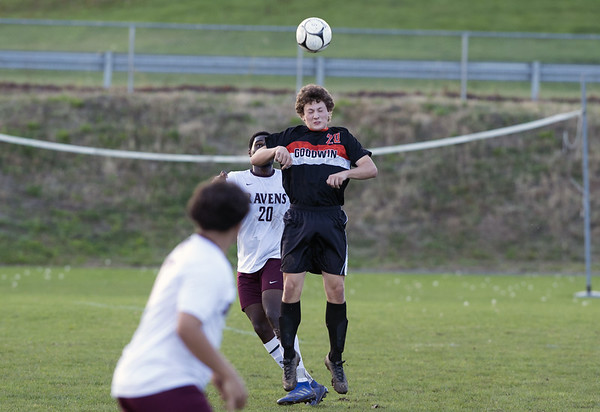 NEW BRITAIN - Vinal Tech provided no challenge for the Goodwin Tech boys soccer team Thursday as the Gladiators protected their home field to the tune of a 7-1 win.

Julien Stepien notched a hat trick in the effort and led the dominant offensive attack from Goodwin Tech, which outshot the Hawks 12-6 in the contest. The Gladiators will face Innovation in their next match Monday.

Newington 9, Bulkeley 1: Newington fired 25 shots on goal in this torrential blowout in Hartford as seven different Newington players found the back of the net led by two goals from Reed Campbell.

Newington has not lost a match since Oct. 3 and will look to continue that streak Tuesday against Maloney, which Newington already defeated 4-0 earlier this season.

Berlin 4, Middletown 1: The Redcoats took another step up in the Class L standings Thursday with a strong win over Middletown. Berlin was able to find goals from four different players in the match including Jenna Zup, Jess Ingenito, Shannon Flaherty and Jenna Wenzel.

Up next for the Redcoats will be a home match against Rocky Hill.

Southington 5, Bristol Central 2: The Rams and Blue Knights squared off for the second time this season and this one was not as close as Southington’s 2-0 victory from Oct. 6.

Jessica Carr and Shannon Litchfield each netted two goals for the Blue Knights while Maya Wroblewski scored one and assisted on two. The win keeps Southington undefeated after eight matches while the Rams suffered their third consecutive loss. Rachel Wygant scored the team’s first goals and assisted the other which came off the foot of Hannah Aldieri.

Up next for the Blue Knights is a road match against Bristol Eastern while the Rams will look to beat Plainville for the second time this season.

Bristol Eastern 2, Plainville 0: The Lancers picked up their third straight win Thursday by shutting out Plainville for the second time this season.

Grace D’Amato posted four saves along with the clean sheet while Emily Nelson and Breanna Venturo-Nelson took care of the scoring on the other side.

Plainville is coming off of its first win of the season and will to find another win Tuesday at home against Bristol Central while the Lancers will host undefeated Southington.

Bristol Eastern 3, Plainville 0: Another day, another win for the Bristol Eastern girls volleyball team, which extended its undefeated streak to eight matches to begin this season.

The Lancers swept Plainville for the second time this season and did so in even more emphatic fashion this time winning the sets 25-10, 25-4, 25-4. Amber Champagne posted eight aces to go along with one kill and two digs while Hannah Podolak and Abby Jones each finished with four assists.

The Lancers will travel to Southington on Monday for their next match while the Blue Devils will look to get their first win of the season against Bristol Central.

Bristol Central 3, Southington 1: The Rams won their sixth straight match Thursday with a strong win over the Blue Knights who were looking to start a winning streak.

After splitting both of the first sets 25-21, Central won the next two sets, but were pushed to the brink in each of them. The Rams won the third set 25-23 and the fourth set 26-24 led by 18 kills from Emily Ericson and 38 assists from Gwent Torreso.

Rachel Possidento and Morgan Birdsey were the scoring leaders for Southington, which suffered its fifth loss of the season. The Blue Knights will look to bounce back against undefeated Bristol Eastern while the Rams move on to face Plainville on Monday.