Southington girls soccer shuts out Farmington thanks to acrobatic save, dominant ball possession 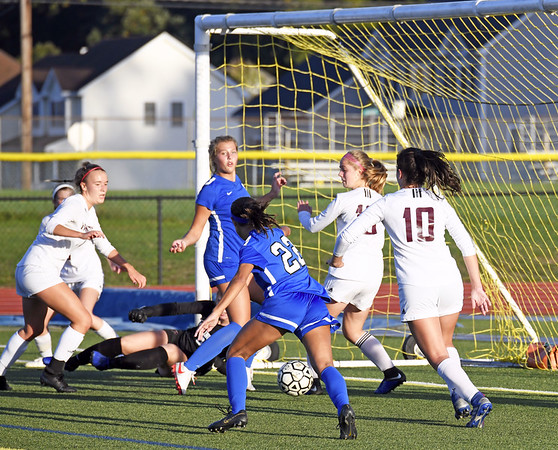 The Southington girls soccer team plays against Farmington on Thursday. The Blue Knights won 2-0 to stay unbeaten on the season | Dan Heary Buy this photo
Published on Thursday, 15 October 2020 19:52
Written by RYAN CHICHESTER

SOUTHINGTON – One of the main goals for the Southington girls soccer team heading into a game is to pitch a shutout, no matter what. With Farmington visiting on Thursday evening, armed with its unbeaten record and 5.4 goals per game this year, the Blue Knights faced their toughest test in accomplishing that goal.

But dominant ball possession and a circus save by goalkeeper Emily Eigo helped Southington accomplish its mission and leave Fontana Field with a 2-0 win over the Indians to remain perfect on the season, while still having not allowed a goal through six games.

“We have goals in our season, and we always talk about how we want that goose egg,” Southington head coach Mike Linehan said. “We like to out-possess teams. But that’s important.”

It wouldn’t have been possible without Eigo, who saw little action until the closing seconds of the first half, when a deflection resulted in a breakaway for Farmington’s Elizabeth Neri. But Neri’s point-blank shot was turned aside by Eigo to preserve what at the time was a scoreless tie.

Instead of falling behind 1-0, the Blue Knights (6-0) came out in the second half and went right back on the attack and finally broke through with 22:34 left in the match, when a throw-in found Allison Carr in front of the net, and the all-conference senior quickly turned toward the goal and tucked a shot just underneath the crossbar and just inside the left goalpost, just out of the reach of a leaping goalkeeper Maggie Huelin, to give Southington a 1-0 lead.

“I was hoping to get it to that spot,” Carr said. “I kind of just took a shot and it went in.”

Southington and Farmington (4-1-1), both consistently among the top teams in the state, hadn’t had a head-to-head matchup decided by more than a goal since 2014, a seven-game span. But that changed when Maya Wroblewski gave the Blue Knights some breathing room just six minutes after Carr’s tally. With 14:53 left, the pressure paid off again when Wroblewski broke free down the sideline and beat Huelin to make it 2-0 Southington.

“It was good,” Wroblewski said. “After Alison scored, we all said ‘Let’s get one more.’ It felt really good to know that I hit it on frame.”

The Blue Knights set the tone for their statement win early, controlling possession and recording the first shot of the game when all-conference senior Shannon Litchfield fired a long-distance shot on goal that was caught by Huelin. Later in the half, Lauren Verrilli kept up the pressure for Southington, trying to squeeze through a centering pass that was deflected right back to Verrilli, who quickly let off a strong shot that sailed above the crossbar.

Minutes later, Litchfield got another chance in front of the net from 20 yards out, but the shot whizzed just wide of the goalpost to keep the game scoreless.

With 27 minutes left in the first half, Wroblewski sent the Blue Knights’ first corner kick to Jessica Carr, who headed a shot that trickled off Huelin in net and almost in the goal before it was quickly cleared out by an alert defender. The clear attempt deflected back to Carr, whose turnaround shot was stopped by Huelin, as Southington’s pressure refused to relent.

Litchfield continued to keep the Blue Knights on the attack throughout the first half, firing a pair of sharp-angle shots that rolled just wide of the far post, and with 9:40 left in the half, took a centering pass from Morgan Hubert and nearly got a shot past Huelin, but it was slowed just enough that Huelin was able to knock it aside just before it snuck inside the near post.

“Shannon does a really good job getting to goal,” Wroblewski said. “I think that’s what brought us all up. But once we weren’t scoring, we told each other that we had to finish. In the second half, we had that edge to just go and shoot on goal.”

The Blue Knights appeared to be on track to dominate the scoring chances through the first half, but with one minute left on the clock, Neri saw a deflected ball near midfield fall right to her, and nothing stood between her and a goal aside from 40 yards of green turf and Eigo. With Southington defenders in a desperate sprint to try and catch up and take away the chance, Neri dribbled in within 15 yards of the goal and let go a shot towards the far post, but Eigo stuck out her left leg to make a highlight-reel save and keep the game tied at zero through the first half.

“That was crazy,” Allison said. “She’s an amazing keeper. She hasn’t gotten much action this year, but I don’t know what we’d do without her. It was a really big save because it gave us another shutout.”

The save kept the Blue Knights’ goal of allowing no goals alive for another night, and sealed a big win against one of their toughest competitors on this year’s schedule.

“For us to walk away today after I’ve watched all their scores, and I knew what they had up front, you have to walk away proud,” Linehan said.

Ryan Chichester can be reached at (860) 8-1-5094 or rchichester@newbritainherald.com