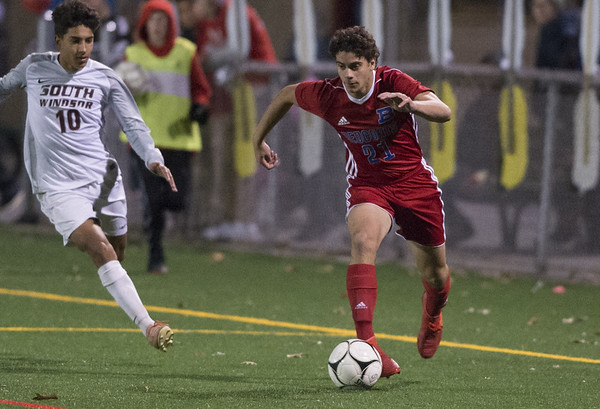 BERLIN - The Berlin boys soccer team, coming off a rough 2019 season, began this season without a win in its first four games, but it finally showed a glimmer of hope on Tuesday.

The Redcoats are officially into the win column in 2020, beating the Bulldogs in convincing fashion with a big second half at Sage Park, matching the program’s largest margin of victory since November of 2017, when they beat Platt 7-2.

Berlin led 2-0 at the break before pulling away in the second half, highlighted by two goals from Adam Kozubal. Colby Nardelli, Ethan Naumann and Ryan Garrity all found the back of the net for the Redcoats as well, with Nardelli also picking up a pair of assists.

Zach Cancellieri made four saves in net to help pitch a shutout for Berlin.

Southington 2, Avon 1: Like Berlin, the Blue Knights also picked up their first win of the season on Tuesday, edging Avon thanks to two straight goals after falling behind early.

Avon held a 1-0 lead early in the first half, but Southington battled back with the equalizer midway through the first half, when Cole Marek connected following a corner kick from Liam Schroeder. Minutes later, Trevor Sousa put the Blue Knights in front by curling home a free kick to get Southington in the win column.

Goalkeeper Ryan Lunn shined down the stretch to keep the Blue Knights in front.

“Avon played extremely well in the second half and had the majority of possession,” head coach Austin Magaro said. “Ryan Lunn made fantastic save after fantastic save to deny Avon their well-deserved equalizer. We were lucky to hear the final whistle and get away with maximum points.”