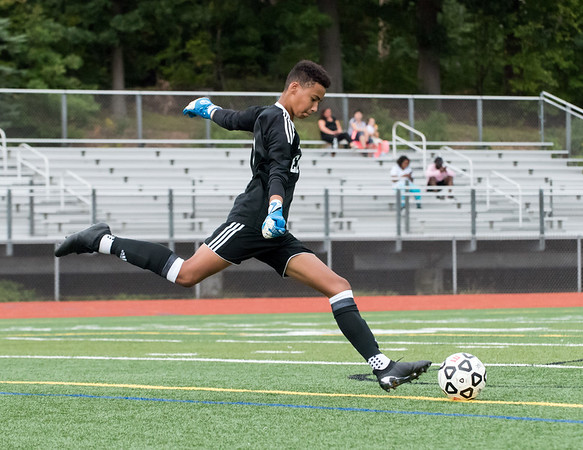 AVON – The first weekend of the 2020 fall season was already supposed to be a busy one for local teams, but was even more action-packed after the Bristol Eastern boys soccer team had its opening match moved to Saturday afternoon following a positive covid-19 case in Farmington, the Lancers’ scheduled opponent for Thursday’s opener.

Instead, Saturday’s contest with Avon became Eastern’s first, and the two teams battled to a 2-2 draw, unable to compete in an overtime period due to the new covid-19 precautions that have been put in place for this unique season.

The Lancers were in position to start the year off with a victory, but Avon put home the game-tying goal with just one minute remaining on the game clock.

“We worked hard throughout the game,” Eastern head coach Bill Sweet said. “We missed some chances, but overall the tie reflected the balance between the teams.”

The Lancers struck first with 11:22 remaining in the first half when Elijah Parent put home a pass from Connor Policarpio. Avon tied the game at one with a goal 15 minutes into the second half, and less than 10 minutes later, Andrew Lozier drove a long free kick into the back of the net to give the lead back to Eastern before Avon salvaged the draw late in the second.

Eastern goalkeeper Nate DiLoreto made four saves on the day, while Jack Noyes had six for Avon.

The Lancers are back in action on Tuesday afternoon against Plainville.

The Blue Knights walked away from their second match of the season still looking for their first goal, falling to the Blue Devils two days after battling New Britain to a scoreless tie in Thursday’s season opener.

Southington had a chance for that first tally when Mitch Messina sent a through ball to Cole Marek, whose shot beat Plainville goalkeeper Nate Masco, but the shot glanced off the post and bounced wide.

Masco was fantastic in net otherwise, stopping all four shots he faced.

The Blue Devils began their scoring when All-State senior Pat Gryzcewski scored an unassisted goal with just 5.8 seconds remaining in the first half, and Mike Oullette added an insurance goal in the second half off a feed from Trevor Rau to put the game out of reach.

Newington was handed its first loss of the season on Saturday afternoon, falling to its rival in its home opener.

Newington got its two goals from Christian Amaral and Diogo Caetano, while Xander Ford made seven saves on 14 shots in net. Wethersfield had a pair of two-goal scorers in Richard Darrell and Anis Nurkic, with the fifth Eagles goal coming on an own goal by Newington.

Newington will remain home and host Maloney on Tuesday afternoon.

The Blue Knights continued their fast start to the new season, jumping out to a 3-0 halftime lead and rolling to a 5-0 win on Saturday afternoon.

Micaela Potamis started the scoring for Southington, and assisted on Shannon Litchfield’s goal later in the half, which made it 2-0 Blue Knights. Nina Muir added an unassisted goal prior to the first-half whistle to extend the lead.

Emily Eigo made a pair of saves in net for the Blue Knights, while the offense peppered Plainville goalkeeper Amanda Linnhoff with 30 shots on goal. Linnhoff finished with 12 saves.

Saturday afternoon was senior Ashley Wenzel’s first home game back since breaking her leg just before the 2019 season, and to say she made the most of her long-awaited return would be an understatement.

Wenzel went on a scoring flurry against the Blue Dragons, scoring four goals and recording two assists in the blowout win. Kyle Jefferson, Jenna Zup and Julia Salina added the other goals for the Redcoats, while Jenna Wenzel, Erica Lavoie and Sam Negrao all picked up assists.

Natalia Chorzepa and Emily Kulinski teamed up to pitch a shutout in net to get Berlin its first win of the season. The Redcoats will hit the road and travel to face Rocky Hill on Tuesday.

The Falcons’ offense caught fire on Saturday evening, rolling to an easy victory at home to move to 2-0 on the season. Nina Zwolinski led the way with a pair of goals, while Raegan Davis, Abby Stanford, Delaney Jordan and Nadia Riemer all found the scoring column as well.

Janet Lliguiczaca added the lone goal for Sacred Heart, in what was otherwise a cheerful Senior Night performance from St. Paul.

For the second time in three days, the Blue Knights picked up a win through a dominant sweep after rolling over the Blue Devils on Saturday (25-20, 25-7, 25-8). Plainville battled in the first set before Southington took complete control.

Rachel Possidento had a complete afternoon with six kills and six service aces, while Victoria Zajda had six service aces and 14 assists. Kayli Garcia, Jackie Dobransky and Gabrielle Ferreira all had five kills, and Emma Phanzelt chipped in eight digs.