Despite no longer playing in high school with one another, Southington American Legion baseball relishes chance to continue competing together 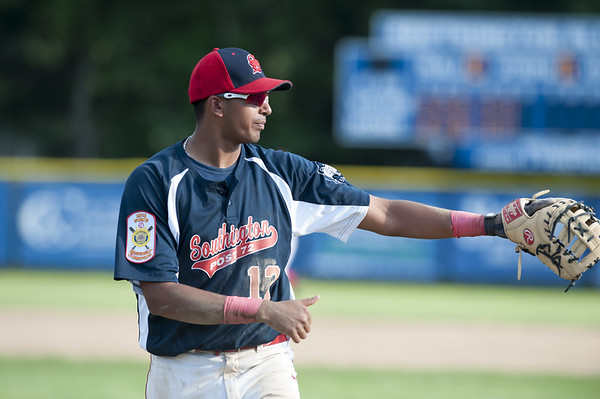 SOUTHINGTON - When Jeremy Mercier clobbered a walk-off double in Thursdayās thriller against RCP to send the Southington American Legion baseball team to the South Windsor Super Regional, he was greeted at second base by a mob of teammates, who later snuck behind their hero and doused him with cold water.

For Post 72, the moment carried greater meaning because of the familiar faces the team celebrated with.

āIt means a lot to win it for the person next to you,ā Mercier said. āWe just do it for each other.ā

Itās easy for Southington to try and win it for their teammates, mainly because those sitting alongside them in the dugout have been there for years.

In an era of AAU, Southington has been one of rare programs that has been able to retain its talent through the years, resulting in last seasonās state championship and now another trip to the Super Regionals.

Southington will face Waterford in the 1 p.m. game today in South Windsor, while Bristol takes on West Hartford in the 4 p.m. game in the double elimination bracket.

That kinship holds strong for Southington, even when its players move on from the high school level to college. Southingtonās group this year contains eight players who graduated in 2018, but return to continue their legion careers in the summer.

Even those who play baseball at the collegiate level find themselves coming back to Verderameās group, despite numerous AAU and travel leagues sprouting around the area.

There might be better options out there in terms of competition, but for the Southington players who return every summer, nothing beats the chance to get back on the field with those that they learned the game with.

āWeāve known each other for so long,ā first baseman and Brandeis University player Aneesh Avancha said. āThereās a big bond with all of us. We love playing for this coaching staff. We get a chance to get a ring every year, so thatās a big reason too.ā

Winning makes the game fun for Southington, but winning with old friends makes it even more special. Most of the team played together from Little League through high school, and the Legion season provides a chance to enjoy the game together before there is no longer a chance to do so.

āThis is these guysā last chance to play together, and they know it,ā Verderame said. āThereās nothing better than to play with your brothers and have fun, and win doing it.ā

For the four members of the team - Avancha, Nick Borkowski, Brandon Kohl and Josh Panarella - who will continue their careers in college once spring rolls around, there is more to their Legion campaign than reconnecting with longtime teammates. While a great number of teams in the state have suffered due to key pieces leaving, Southington has maintained its core, even its best pieces, that are looking to stay sharp before returning to school.

āOur zone with Bristol and West Hartford, Simsbury, they all have good pitching,ā Avancha said. āWe learn a lot. The competition is still good here. It prepares us for the college season and the future.ā

For now, Avancha and the rest of Southingtonās returnees are enjoying the present, with the close-knit group gearing up for another run at the title, and another chance to make more lasting memories that out-weigh the glamour of other summer options.

āItās just the thrill of playing with each other,ā Mercier said. āAAU is a big thing now and there are a bunch of towns with leagues that go all around, but most of the kids in this town play Legion, and we just want to play together as much as we can. This is one of the last times we get to do it.ā