Dominick Dao (2) of Terryville goes up for a transition score over a Plainville defender Monday night in Plainville. | Tyler Hetu Buy this photo 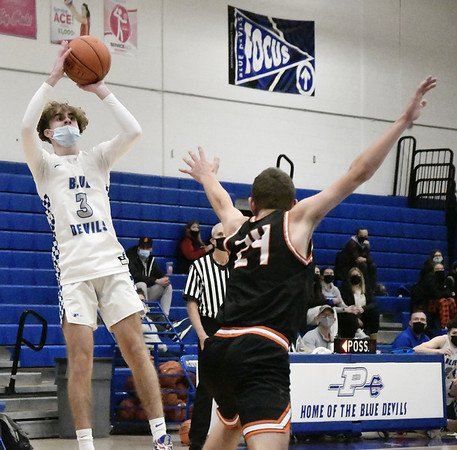 Plainville's Brady Wieczorek (3) pulls up for a mid-range jumper over a Terryville defender. | Tyler Hetu Buy this photo

PLAINVILLE - It was all Terryville Monday night as Terryville boys basketball beat Plainville 65-40 in the Rybczyk Holiday Tournament.

Terryville got out early to a 13-5 lead in the first quarter before Plainville was able to stop at 7-0 run with a three pointer in the corner from Brennan Staubley.

At the end of the first-quarter Terryville led 16-8, holding a commanding lead over Plainville that only grew through the next right minutes.

“We got out of our game,” said Plainville boys basketball coach Scot Wenzel. “I don’t think we ran very disciplined sets. We’ve got to be able to run through things and get good looks, and I don’t think we did that. We rushed shots, took some bad shots in transition, and when you miss those shots they’re coming back down the other way on a fast break and will make you pay.”

Through the fourth quarter Terryville continued to maintain its lead an extended going to the free throw line three times pause scoring multiple times in transition, moving on to 4-0.

“Honestly, the guys did everything I could have asked for,” said Terryville head coach Mark Fowler. “… I think we were down two or three starters and some young guys stepped it up. … We crashed boards hard and didn’t turn the ball over and that’s a recipe for winning.”

Terryville’s Dominick Dao scored 24 in the win, a game-high. His ability to push the floor and break out the attack quickly helped give Terryville an advantage that Plainville struggled to match. The added bonus to Dao’s presence on the floor was a supporting cast that finished his plays with scores more often than not.

“They’ve got a difference maker. Dao is one of the best guards that we’ll probably see all season long,” said Plainville head coach Scot Wenzel. “… We wanted to make sure whenever he didn’t have the ball he didn’t get it back. We didn’t do a good job of doing that. We wanted to collapse on him as much as possible, but he’s very shifty. When we did do a good job of stopping him, he always found the open guy. He’s great player.”

Fowler also had high praise for Dao, who he heralded as one of the top players in the state at the moment.

“At the end of the day, Dominick is one of the best players in the state and he puts us on his back and carries us,” said Fowler.

Joining Dao as scorers included Charlie Rogers with 12 points and Jake Rinkavage with 11 points. Plainville was led in scoring by Artem Mojica with 15 points, with Dylan Brewer scoring 12 points.

A near half-court heave by Plainville’s Lilly Wazorko didn’t’ connect to make it a one-point game as time expired.

Through the first frame, both sides only had one basket as Plainville led 3-2 through eight minutes thanks to a Wazorko three at the 4:25 mark. The score was the first basket of the contest.

Plainville never generated a comfortable lead through the first half, going ahead by as much as two points in the second quarter before Platt finished the first half on a 4-0 run to lead 13-10.

Platt extended its lead to eight early in the third quarter before a 10-0 stretch by Plainville, supplemented by threes from Wazorko and Elyse Brown, helped bring Plainville back out in front at 22-20.

A score from Platt’s Viana Alcantara put the game even, and a single free throw following her score was the final lead change of the night as Platt held a one-point lead at 23-22.