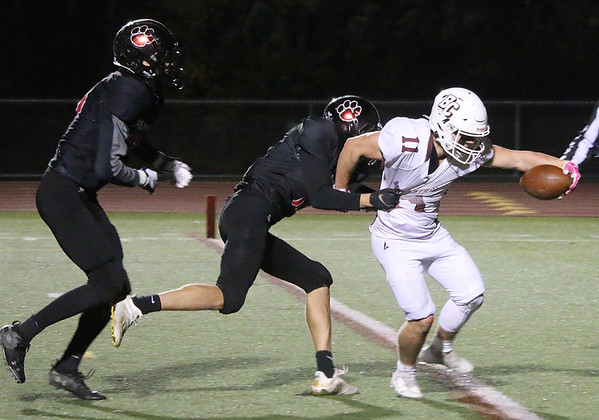 Bristol Central's Justin Despins carries the ball over the goal line for a touchdown against E.O. Smith earlier this season. | David Greenleaf Buy this photo
Published on Thursday, 11 November 2021 20:42
Written by DAVID GREENLEAF

PLAINVILLE - Friday nightâ€™s CCC Tier 3 clash between Bristol Central and Plainville in Plainville has all the makings of a classic high school football showdown. Both teams are coming off big wins from a week ago. Both need to win to keep their playoff hopes alive. Both feature standout quarterbacks with highly different strengths and challenges for the opposing defense. Add to that a matchup between two teams from neighboring towns who have not met on the gridiron in 22 years.

Â â€śItâ€™s an exciting match between two teams that are really battling for their playoff lives,â€ť said Central coach Jeff Papazian. â€śWe need to be ready for whatever they throw at us.â€ť

Plainville quarterback M.J. Bakaysa has been the catalyst for the Blue Devils as they have marched to a 6-2 record this season.

â€śThe quarterback makes things go for them,â€ť said Papazian. â€śHeâ€™s smart. He knows what to do with the football and he has a bunch of good targets in the receivers and tight end. But we canâ€™t sleep on the running back (Kye McGraw) either. They like to mix it up. Weâ€™re going to have to see what their plan is come Friday.â€ť

The Rams are coming off a strong win over a much-improved RHAM team, with Papazian saying the responses to RHAMâ€™s success put out by the Rams were a big boost.

â€śThat was as good a game as weâ€™ve played all year,â€ť said Papazian. â€śWeâ€™re never going to be perfect, but the way we responded to their big plays was a real positive for us.

â€śThe score wasnâ€™t really indicative of how the game went,â€ť Papazian added. â€śAs many times as they came at us, we were able to respond very time.Â  RHAM from week one to now is a team that has come a long way. They were very physical and talented athletically. At the end of the day it was a good day for us.â€ť

The game features a pair of quarterbacks with contrasting styles. Centralâ€™s Victor Rosa is his teamâ€™s main running threat. While he is capable of throwing the ball, he has a run first mentality. He has rushed 2,071 yards and 33 touchdowns in the first eight games.

The state champion in the 200 meters on the track is hard for opposing defenses to catch once he gets loose in the open field. The Devils will need to find a way to control the line of scrimmage and penetrate the wall of blockers that have been setting up Rosaâ€™s long runs all season long.Â

Bakaysa, the son of a former Bristol Central coach, is a strong passer. He led the Devils to a 34-0 shutout of E.O. Smith last week. Bakaysa has passed for close to 1,500 yards on the season, but the Devils have also mixed in a healthy portion of the run game as they work to keep a balanced offense.Â Â

The two teams have played a very similar Tier 3 schedule and have had similar results in most games. Both have lost to Bloomfield. The Rams have won seven in a row since that opening day defeat.

The Devils are 6-2 with their other loss coming in a close one against RHAM two weeks ago.

Central is the number 5 seed in the CIAC Class L playoff rankings heading into this weekend. St. Joseph, Maloney, Naugatuck and Windsor are ranked ahead of them. They are one of eight one-loss teams trying to hold on to a playoff berth.

The Devils are also a number 5 seed, in the Class M rankings. With their final game against 0-8Â  Farmington carrying no bonus points, the Devils will be looking for a much-needed big payoff in the rankings if they can defeat the Rams tonight.

Central and Plainville will be meeting for the first time since 1999. The Rams have a 10-5-1 lead in the overall series and have won the last nine meetings dating back to when the schools were both members of the Colonial Conference.