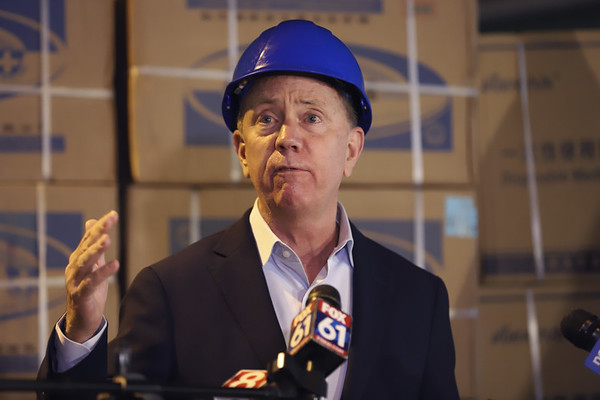 Connecticut Gov. Ned Lamont speaks to the media about the shipment of personal protective equipment from China donated to the state to aid Connecticut's frontline workers in the battle against COVID-19, Tuesday, May 12, 2020 in New Britain, Conn. Lamont thanked China and the China Construction Bank, which donated a large portion of PPE. (AP Photo/Chris Ehrmann) Buy this photo
Published on Tuesday, 23 June 2020 14:26
Written by SUSAN HAIGH and DAVE COLLINS

The Connecticut Department of Motor Vehicles on Tuesday partially reopened four of its branches to begin offering in-person licensing and new vehicle registration services by appointment only, the latest in a series of steps toward resuming operations at one of the state's busiest agencies.

Road testing also resumed Tuesday, in partnership with private driving schools, to reduce a backlog of approximately 1,000 road tests that developed because of the COVID-19 pandemic. They've now been rescheduled through June 30.

“Who would have thought everybody was missing DMV so much,” joked Democratic Gov. Ned Lamont, as he stood outside the Waterbury branch where DMV customers with pre-scheduled appointments waited in their cars until being notified electronically to come inside the building. Branches in Bridgeport, Enfield and New Britain also partially reopened Tuesday for new registration and license services.

New registration services will begin June 30 at the Wethersfield, Willimantic, and Danbury branches. All in-person services now require an appointment, which can be made online.

Meanwhile, additional locations reopened Tuesday for learner's permit knowledge tests. Offices in Wethersfield and Cheshire previously opened May 11 as part of a pilot program. Now, the tests will be offered at offices in Willimantic, Old Saybrook, Norwalk, and Danbury by appointment only.

DMV Commissioner Sibongile “Bongi” Magubane praised DMV staff for their efforts to slowly reopen in a safe way, noting “this journey has not been easy.” She said the agency should be able to start handling more and more walk-in traffic at various branches over the next couple weeks.

“But we needed to start slow because we understand how this pandemic is,” she said. “So we’ve learned a lot in the last three months and we are extremely excited to be in this point.”

For most people, the virus causes mild or moderate symptoms, such as fever and cough. For some, especially older adults and people with existing health problems, it can cause more severe illness or lead to death.

In other coronavirus news in Connecticut:

The University of Connecticut will be cutting nonunion managers’ pay through furloughs and canceling their merit raises as the school grapples with a deficit of more than $50 million in the next academic year because of the coronavirus pandemic.

UConn President Thomas Katsouleas wrote in a recent letter to managers that most nonunion managers will be furloughed for the equivalent of one day a month in the new fiscal year that begins July 1. That would result in a pay reduction of just under 5% for the year.

Katsouleas said he and other senior managers with the highest pay will take the equivalent of two furlough days a month, equaling about a 10% pay cut.

The furloughs and cancellation of merit raises will save UConn an estimated $5 million, school spokeswoman Stephanie Reitz said. They will apply at the main campus in Storrs, regional campuses and the School of Law. Similar furloughs will be taken at UConn Health, Katsouleas said.

Katsouleas also has asked unionized workers for concessions to help with the deficit, but some union leaders oppose the request citing past concessions.

UConn officials plan to present budget proposals Wednesday to the Board of Trustees, including $1.5 billion for the Storrs and regional campuses.