A few dine out for Father's Day Sunday 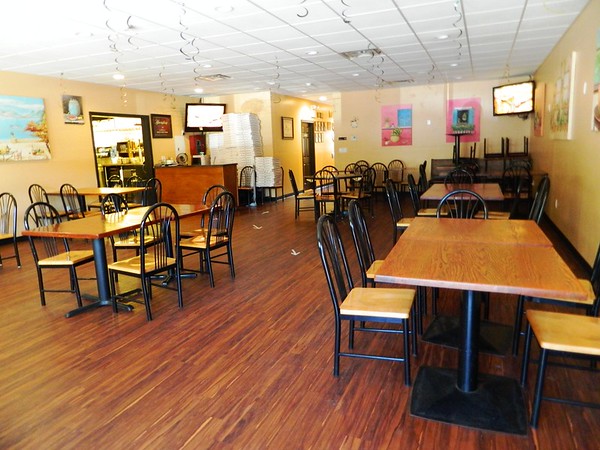 Erica Drzewiecki | Staff The floor is marked and the tables are distanced, but the customers are slow to return to Max Pizza in Bristol. Buy this photo

Father‚Äôs Day was a special occasion for Rudy Roa Sunday, as his wife Cassandra and their four young children took him out to eat somewhere new in Bristol.

They chose Applewood Restaurant, tucking into a big booth to feast on steak, fried chicken, French fries and more.

Seated more than six feet away in other booths and tables across the large restaurant were at least seven other parties, with more outside on the front patio.

The Poke Works Mexican Grill next door hasn‚Äôt been as fortunate.

‚ÄúWe usually have a couple people sitting outside but nobody dining in yet,‚Äù owner Tim Chen said after a family had just picked up a takeout order and exited the restaurant.

That was the case for many local eateries over the weekend ‚Äì nearly empty dining rooms despite having reopened to indoor dining June 17.

Following the state of Connecticut‚Äôs lengthy list of new regulations as best he could, owner TJ Tomak reopened the New Britain Diner that very day.

‚ÄúIt‚Äôs still slow but people are coming,‚Äù Tomak said. ‚ÄúI‚Äôm sure they‚Äôre still scared to come in and dine inside. Everything is safe. Everything is single-serve; we have a hand sanitizer station. I‚Äôm sure it will just take a little time.‚Äù

Seated at a banquette at the rear of the diner was Chris Lamphiere, there celebrating Father‚Äôs Day with his wife and one of the couple‚Äôs adult children.

‚ÄúNow that things are starting to open it‚Äôs nice we‚Äôre actually able to take one of our children out and celebrate his day as well as mine,‚Äù the New Britain resident pointed out.

Across the city inside Paradise Pizza Restaurant, a booth was blocking the entrance into the dining room and owner PK Patel was writing down a call-in order for pasta.

He and his wife have decided to serve lunch and dinner daily but breakfast only on weekends for the time being. Even with a capacity of 120, they don‚Äôt plan on seating more than 40 people at any given time, just to be safe.

‚ÄúI have a lot of older customers,‚Äù he explained. ‚ÄúI don‚Äôt expect them to feel comfortable coming in at this point.‚Äù

When Kulwinder Singh purchased Forestville‚Äôs San Gennaro Pizzeria in December 2019, he didn‚Äôt expect the dining room to be virtually empty all spring.

‚ÄúWe just opened last week and have only had two tables.‚Äù

Although takeout business has been enough to sustain nearby Max Pizza in Bristol, staff are also anxious to have customers return for supper.

‚ÄúNot much; hardly anything at all,‚Äù Niki Koutouvides said on how the dine-in service was going after five days open.

One of the restaurant‚Äôs owners, she‚Äôs not hopeful that people will fill up the dining room anytime soon, despite the fact that tables are more than six feet apart, separate entrance and exits have been designated and staff are masked and prepared.

Erica Drzewiecki can be reached at edrzewiecki@centralctcommunications.com.