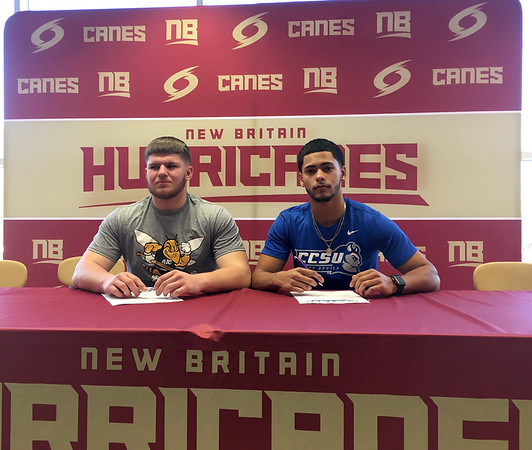 NEW BRITAIN - Justin Adorno and Michael Gajda have shared a lot together throughout their high school tenure as teammates on the New Britain baseball team and best friends both on and off the field.

On Tuesday afternoon, the two senior Hurricanes shared another experience when they both celebrated the next phase in their baseball careers by signing their commitments to play in college next year. Adorno will be staying local to play at CCSU, while Gajda will be playing for American International College in Springfield, Massachusetts.

“It’s great to sign with [Adorno],” Gajda said. “He’s my best friend, and it’s something we have both been working for our entire lives. It’s great to share this moment with him.”

With teammates and coaches looking on, Gajda and Adorno signed on the dotted lines to complete a goal the two have shared since arriving at New Britain High School.

“It’s something I’ve been working at my entire life,” Gajda said. “It’s a great accomplishment. It feels good.”

Gajda, an all-conference selection last spring after he and Adorno led the Hurricanes to the state tournament, chose AIC after also considering Post University and the University of Bridgeport. But the Yellow Jackets, who saw Gajda through a baseball showcase, reached out and invited Gajda on an overnight visit, and he was sold.

“I just really liked the atmosphere there,” Gajda said. “They were all good guys there and I just felt like I fit there perfectly. I went on that visit and went to a camp there and they gave me a roster spot.”

Adorno caught CCSU’s eye also through a showcase, though the Blue Devils had initially seen him through the AAU Connecticut Blue Jays (the former team of George Springer). CCSU was one of two nearby school’s on Adorno’s radar, but as he went along in his process, the Blue Devils stuck out as the more suitable spot for the next stage of his baseball career.

“I talked to my parents, and toward the end of the process it was between Central and Southern [Connecticut State],” Adorno said. “But Central was the best fit for me.”

By choosing CCSU, Adorno will continue his career in the Hardware City, the same place where it began and eventually blossomed.

Adorno will be joining a CCSU program that won its second NEC title in three years this past spring, leading to a spot in the NCAA Tournament and the team’s first-ever tournament victory, a 7-4 win over Cal.

Gajda will join an AIC program that went 19-24 last season and will present plenty of opportunities to play close to home, given that the Yellow Jackets play in the same conference as Southern (Adorno’s second choice) and the University of New Haven.

Joining a winning program was important for both Adorno and Gajda, but back at New Britain, head coach Roberto Mercado puts the feeling of watching his players move on to have such an opportunity over any potential wins for himself.

“This is what you coach for,” Mercado said. “Everyone wants to win a championship, but at the end of the day, this is what it’s all about, to see your kids moving on and pursuing a dream. I’m really proud of them.”

The dream the two friends and teammates shared is now complete, but now a new one begins for the two college-bound ballplayers.

“That was always the goal, to play baseball in college,” Adorno said. “I feel proud, but the work doesn’t stop. We have to keep grinding.”