No. 17 CCSU football will at No. 25 Albany in first-round playoff game 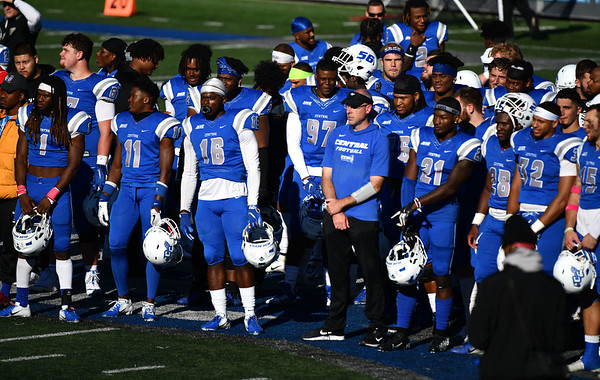 The CCSU football team lines up for its alma matre after a game this season | Mike Orazzi | Staff Buy this photo
Published on Sunday, 24 November 2019 14:12
Written by DAVID GLOVACH

NEW BRITAIN - The Central Connecticut State football talked all season long about working to get to this point.

Now, the Blue Devils and first-year head coach Ryan McCarthy are getting set to face a one-time familiar foe.

CCSU, which moved up to No. 17 in the STATS FCS Top 25 poll, will make its second-ever appearance in the 24-team FCS playoffs when it travels to play No. 25 Albany (8-4) next Saturday at 1 p.m. The game will be broadcasted on ESPN3.

Both programs completed in the Northeast Conference before the Great Danes moved to the CAA in 2013. McCarthy also spent six seasons as Albany’s offensive coordinator from 2008-2013.

A win would send the Blue Devils (11-1) to Montana, which received the No. 5 overall seed and a first-round bye. The other three teams in CCSU’s quarter of the bracket are No. 4 Sacramento State, which will also spend the first round on a bye week, Austin Peavy and Furman.

Like it did in 2017, when it last reached the playoffs, CCSU enters the postseason having won eight straight games, including all seven against its conference opponents. The Blue Devils secured their second NEC title and automatic playoff berth two weeks ago after beating Robert Morris and won the conference outright on Saturday after blowing out Duquesne.

CCSU’s only loss this season came against FBS-opponent Eastern Michigan after the Eagles returned a blocked punt for a touchdown in the final 10 seconds of the game.

Albany, meanwhile, received an at-large bid and will host the first-round matchup despite the Blue Devils winning their conference and being ranked higher in the top 25. The Great Danes have won five of their last six games and are 5-1 at home this season. Their only loss during that stretch was against Maine.

The last time the Blue Devils and Albany played one another was in 2014, which ended in a 19-0 loss for CCSU.