Football Preview: No. 18 CCSU already clinched the NEC's playoff spot, but wants to win conference title outright as it gets ready to face Duquesne 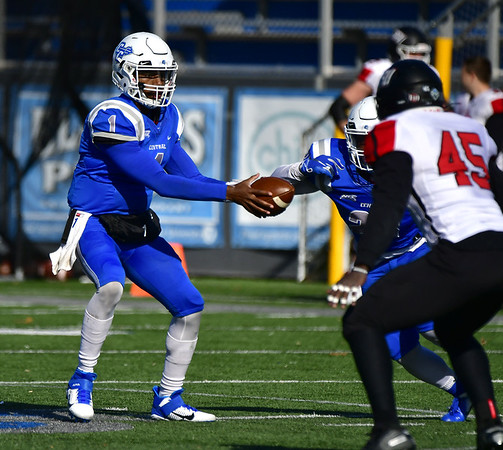 NEW BRITAIN - Aaron Winchester wasnŌĆÖt around the last time the Central Connecticut State football team played Duquesne, but the quarterback knows the importance of SaturdayŌĆÖs matchup, even with the Blue Devils already locking up their spot in the FCS playoffs.

ŌĆ£ThereŌĆÖs a little extra playing Duquesne from what they did to us last year,ŌĆØ Winchester said. ŌĆ£WeŌĆÖve been harping on it since the summer that we want a shot at these guys.ŌĆØ

What the Dukes did to CCSU last season was deny it a chance to clinch a share of what would have been the Blue DevilsŌĆÖ second straight conference title.

With 24 seconds left in the game, Nehari Crawford shed off a D.J. Exilhomme tackle and raced up CCSU sideline for a 56-yard touchdown to break a 31-31 tie. Duquesne went on to the postseason. The Blue Devils had to wait 359 days for another chance at a win.

But as recent history has shown, beating Duquesne (6-4, 2-2 NEC) wonŌĆÖt be an easy task. The last two meetings between the two programs have come down to executing late in the fourth quarter. In 2017, CCSU erased a 13-point deficit in the final seven minutes to earn the league crown and the programŌĆÖs first-ever playoff spot.

The Dukes also have a roster that features 18 FBS transfers and that doesnŌĆÖt include running back A.J Hines, the FCS active leader in rushing yards and touchdowns. ThereŌĆÖs also the fact Duquesne lost to Robert Morris - who the Blue Devils beat last weekend for the NEC title - and Bryant in back-to-back weeks, so the Dukes are going to come in with plenty of their own motivation.

ŌĆ£ItŌĆÖs a unique situation,ŌĆØ head coach Ryan McCarthy said. ŌĆ£We secured the playoff spot last week, but weŌĆÖre still playing for a lot. We still have a lot in front of us. This game will determine if we get a home game in the playoffs. WeŌĆÖre still trying to win the conference outright. We havenŌĆÖt done that yet.ŌĆØ

But this game will more than likely come down to the defenses. Both No. 18 CCSU (10-1, 6-0) and Duquesne have two of the top 10 defensive units in the country.

ŌĆ£We just need to keep our composure, stay down and grind,ŌĆØ said cornerback Dexter Lawson, Jr., who leads CCSU with six picks. ŌĆ£We know that we won the [conference] championship, but we know thereŌĆÖs more out there to win. ThereŌĆÖs a lot out there for us to accomplish and we know that weŌĆÖre capable of doing of great things.ŌĆØ

Stopping Hines will be the top priority for the Blue Devils, as well as his backup, Mark Allen. Together, the duo has rushed for 1,459 yards and 10 touchdowns. Last week against Bryant, both Hines (770 yards, 6 touchdowns this season) and Allen (689 yards, 4 scores) went over the 100-yard mark and scored at least one touchdown.

The two have carried much of the offensive load, especially with starting quarterback Daniel Parr likely out with an injury. His backup, Brett Brumbaugh, has struggled in his two games this season, which were also DuquesneŌĆÖs last two losses. Overall, Brumbaugh is completing just 521.5 percent of his passes for 534 yards and three touchdowns to six interceptions.

ItŌĆÖs part of the reason the Dukes have scored just 21 points and 16 points in those games. It hasnŌĆÖt helped either that DuquesneŌĆÖs offensive output has dropped from 30.5 points per game heading into last seasonŌĆÖs matchup to 23.5.

Offensively, CCSU will have to continue to get its own run game going, especially with opponents keying in on Winchester and Tyshaun James.

Winchester ranks third in the FCS in pass efficiency (172.8), fourth in completion percentage (67.1 percent) and seventh in yards per completion (14.8). Overall, he has thrown for 2,213 yards, 16 touchdowns and just three interceptions. Winchester is also the teamŌĆÖs leading rusher with 728 yards and eight scores.

James, meanwhile, leads the NEC with 13 total touchdowns and is just 125 receiving yards from 1,000 on the season. HeŌĆÖs rushed for 119 yards and 5 scores as well.

Last week, the Blue Devils rushed for 389 yards and five touchdowns, and dominated the time of possession 41 minutes to 19. It resulted in CCSU having three players run for at least 90 yards. Danley Exilhomme ran for 185 yards on 26 carries. Winchester finished the game with 91 yards and four touchdowns and Enyce Walker had 90 yards and a score.

A repeat of that kind of performance would certainly go a long way to closing out the regular season with a win.

ŌĆ£We know every game is going to be tough,ŌĆØ Winchester said. ŌĆ£We have that bullŌĆÖs eye on our back and we know we have to bring our A-game.ŌĆØ