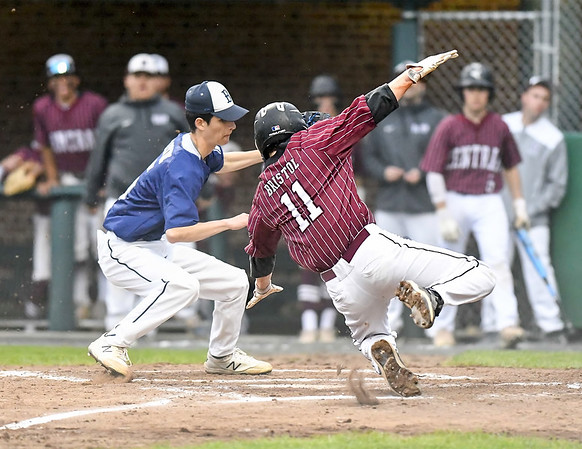 Laura Bailey photo Bristol Central's Christian Stafford scoring the only run of the game Buy this photo
Published on Wednesday, 4 May 2022 14:32
Written by LAURA BAILEY

BRISTOL – Bristol Central claimed a 1-0 victory over Bristol Eastern in a cross-town showdown at Muzzy Field Tuesday night. Excellent pitching on both sides kept the crowd on the edge of their seats for all seven innings.

Central was up to bat first, loading the bases to start the game. Aidan Lopez was the first to reach base, slapping out a single to start the game. Christian Stafford walked and junior catcher Ryan Ring was hit by a pitch. Eastern pitcher Mike Roalf was able to get out of an early jam when sophomore Anthony Santilli grounded out to short.

The third inning began with Central junior Christian Stafford reaching first base on an error. A passed ball allowed Stafford to advance to second, and a flyout from senior captain J.T. Clark allowed Stafford to get to third. Stafford saw an opportunity on another passed ball and he headed for home. Speedy Stafford’s 90 foot dash ended with his hand touching home plate to score the game’s only run.

Central pitcher Nate Pirog shut down the Eastern offense for four innings before giving up his first hit of the night to Ryan Maglio. The junior right hander led off the bottom of the fifth with a single to left field. Pinch runner Kamden Laprise took off running on a base hit to right from Rio Hernandez. Laprise continued full speed past second and beat out the throw to third base, and Hernandez advanced to second when the ball began to roll away at third. With two men on and no outs, the Rams brought Spirito to the mound to relieve Pirog. Spirito retired the next three batters, collecting two strikeouts before Connor Cyr grounded out to end the inning.

The Lancers had their final hope of scoring in the bottom of the seventh when Connor McCormick hit an infield single with two out. Owen Myers was the final batter of the night, hitting a pop fly to end the game.

Winning pitcher Spirito gave up two hits and struck out six in his three innings pitched. Pirog pitched four innings, giving up two hits and striking out six. The Lancers’ Mike Roalf took the loss despite his solid performance on the mound.  In his first start against Bristol Central, Roalf gave up four hits and collected three strikeouts.