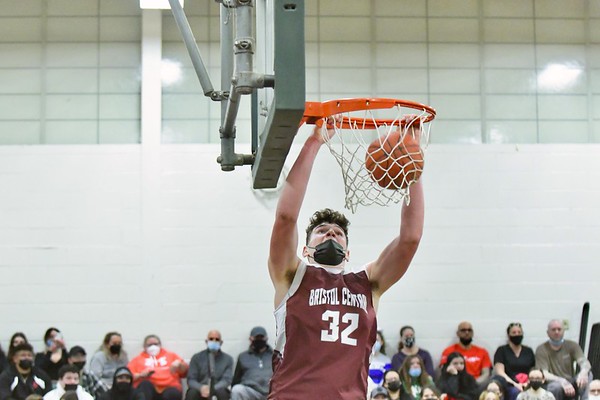 Donovan Clingan dunks during the first half of Bristol Central's win over Bristol Eastern on Feb. 21. Clingan scored the 2,000th point of his high school career during the second half in this game. | Laura Bailey Buy this photo
Published on Monday, 21 February 2022 21:37
Written by MATT HORNICK

BRISTOL â€• Bristol Central boys basketball checked two items off its to-do list for the season with its win over rival Bristol Eastern on Monday night.

The 76-50 victory completed the Ramsâ€™ undefeated regular season, stretching their winning streak to 35 games in a row over the last two years, while senior center Donovan Clingan scored the 2,000th point of his career, becoming the 26th boys basketball player in Connecticut history to reach the milestone.Â

â€śTo do this a Bristol Central [versus] Bristol Eastern game meant a lot because thatâ€™s just a big rivalry that we always loved,â€ť Clingan said.

The season-ending contest also served as senior day for Eastern, as the duo of Elijah Borgelin and Jeremiah Tatum were recognized for their time with the program. Borgelin, who missed a large portion of the season with an injury after missing all of last year, received the honor to start alongside his teammates and score his teamâ€™s first basket of the game.

â€śYou have to credit [Central] coach [Tim] Barrette for allowing us to do that,â€ť said Bunty Ray, head coach of Bristol Eastern. â€śI thought it was important [for] him to get those two points and getting in the box score. I think that was important for everybody, so I appreciate the gesture on their end.â€ť

Clingan picked up his latest scoring accolade after already becoming the all-time scoring leader at Central and in the city of Bristol, and also breaking Centralâ€™s single-game scoring record twice. He finished Mondayâ€™s game with 31 points and will enter the postseason with 2,006 points to his name, which puts him 25th on the stateâ€™s all-time scoring list for boys basketball.

â€śHeâ€™d be chasing the state record, I believe, if he hadnâ€™t had so many games canceled due to covid,â€ť Barrette said. â€śWhat an accomplishment, what a play to get it on. I thought the execution on that play was excellent and he finished it like he has for four years.â€ť

The soon-to-be UConn Husky ripped the ball through the rim on the first play of the second half to join the 2,000-point club. A couple of quick passes and a screen gave Clingan a straight line to the basket where he found a well-placed lob from fellow-senior Damian Glasper waiting for him in front of the bucket

â€śOur team is so proud of him, heâ€™s carried us this entire time,â€ť senior Carson Rivoira said. â€śHe puts the time in and he earned this.â€ť

Central led by 28 points entering the third quarter, which allowed Clingan to permanently exit the game before the start of the final period. Clingan scored 23 points in the first half while the Rams outscored Eastern 21-5 in the second quarter.Â

Struggling to keep up after Borgelinâ€™s ceremonial, but official, basket made the score 2-2, the Lancers continued to fight even as the game was clearly out of reach. They succeeded in cutting into their deficit late in the game against Centralâ€™s reserves, going off for 25 points in the fourth quarter behind four three-pointers.Â

After losing by 49 the first time these teams met this year, Ray said he decided to leave his starters in to let them continue to fight. Sophomore Lukas Sward scored seven points in the final period to finish with a team-high of 16.Â

â€śI wanted them to play it through,â€ť Ray said. â€śTheyâ€™ve done a lot over the course of the year and theyâ€™ve really impressed me down the stretch. I wanted to keep them on the floor because of how hard they worked and they deserved the minutes.â€ť

While the Lancersâ€™ season is over, the Rams will begin what they hope to be a lengthy postseason run Thursday in the first round of the Central Connecticut Conference Tournament.Â