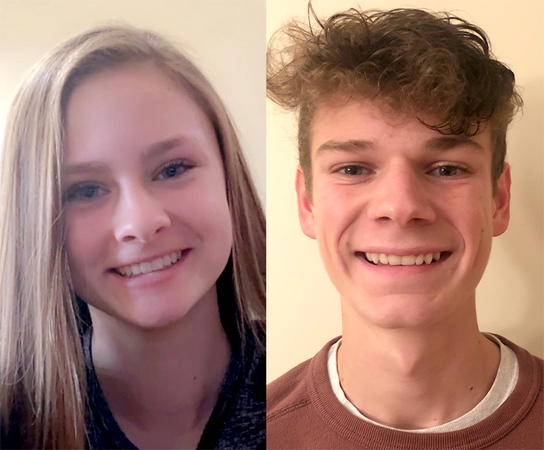 Eastern‚Äôs Ciara Collins and Central‚Äôs Adam Jones are our Bristol Press Athletes of the Week. Buy this photo
Published on Monday, 23 December 2019 21:25
Written by BOB MONTGOMERY

This week‚Äôs ‚ÄúAthlete of the Week‚Äù picks, Ciara Collins of Bristol Eastern and Adam Jones of Bristol Central, can now add another item of recognition to their high school sports resume. These multiple sports athletes have been honored several times in helping make the teams they play for better.¬Ý

Collins, the daughter Jim and Orla Collins, captured these same honors last year as a freshman varsity basketball starter and has received attention for her play in soccer and lacrosse for the Lancers. This honor stems from her performance last week in a 61-49 Thursday night loss to visiting Glastonbury.

Collins, who can switch from point guard to shooting guard, scored 15 points on five field goals, one a three-pointer, and four fouls. She joined with Jordan Oulette to combine for 12 of Eastern‚Äôs 18 third-quarter points to keep them just one point behind at 43-42 before Glastonbury outscored the Lancers by 11 points in the final frame.

Coming off a 15-7 year where they fell in the quarterfinals of the 2018 Class L tournament play, the Lancers lost Paige McLaughlin from graduation, but have a returning ‚ÄúBig 3‚Äù in Arbuckle, Oulette and Collins.

‚ÄúI think this year we can make it just as far as last year as long as we work as a team,‚Äù Collins said. ‚ÄúWe lost our first game and we‚Äôre looking to do better in the upcoming games. We have a lot of skills, pretty good shooting and we have a lot of height compared to other teams, so we work well in the paint. We‚Äôre quick and in good shape.‚Äù

In noting her role on the team, playing either point or shooting guard, it‚Äôs wherever she is needed.

‚ÄúI like being able to fill the lanes, shoot from the outside and also pass to the post players,‚Äù Collins said.

And far as playing basketball, she‚Äôs following in her mother‚Äôs footsteps.

‚ÄúI started at six years old and that was the Upward (Basketball) program (through Hillside Community Church),‚Äù Collins said. ‚ÄúMy mom played basketball when I was younger and my dad doesn‚Äôt play but enjoys watching. My mother played in Ireland and one year at St. Thomas Aquinas in New York.‚Äù

Collins has also played AAU ball with the CT Spirit and is currently with the CT Bandits during the school basketball off-seasons.

Jones, a senior, is the son of Laura and Todd Jones and he‚Äôs being recognized for his fall soccer play. Next week‚Äôs ‚ÄúAthlete of the Week‚Äù picks will come from the high school winter schedule.

‚ÄúHe‚Äôs a senior captain, all-conference and four-year starter,‚Äù head coach Nate Jandreau said. ‚ÄúHe‚Äôs tied with the team lead in scoring. He missed four games during the regular season, but had a big year with 12 regular season games and the conference and state tournaments. ... He‚Äôs the kind of kid that does whatever you need.‚Äù

Jones, who missed those four games because of a pulled quad, enjoyed this past season, one where the Rams went 11-6-2 overall and 9-5-2 on the regular season.

‚ÄúWe started off slow and our record was 1-2,‚Äù Jones said. ‚ÄúOnce we kind of got used to each other we went on a seven-game winning streak. We faced a lot of teams we were able to beat and who beat teams that were tough. I honestly think I was expecting more, but once we started winning I believed there were no teams that could stop us.‚Äù

Jones, who‚Äôs played the right midfield and forward positions, was as Jandreau said, a key offensive player for Central.

‚ÄúMy role is to score or cross the ball for the other players to score,‚Äù Jones said. ‚ÄúAs a team captain, you have to take charge on the field if other captains are out. Also, to help make the other kids get more of an awareness of the game.‚Äù

In getting to where he is today, Jones took up the sport at age six and that was through the Bristol Soccer Club as a right midfielder. When he got to high school there were a number of good players in that position, so he played elsewhere because Jandreau wanted him on the field with his talent.

‚ÄúMy junior year, I played right midfielder and I had the most assists on the team,‚Äù Jones said. ‚ÄúAnd senior year I played mostly forward and tied on the team with David Bowes for the most goals.‚Äù

Besides soccer, Jones competes in outdoor track for the Rams in running the 400, 800 and 1,600 meters. As far as college goes, he doesn‚Äôt plan to compete in sports while likely studying political science.