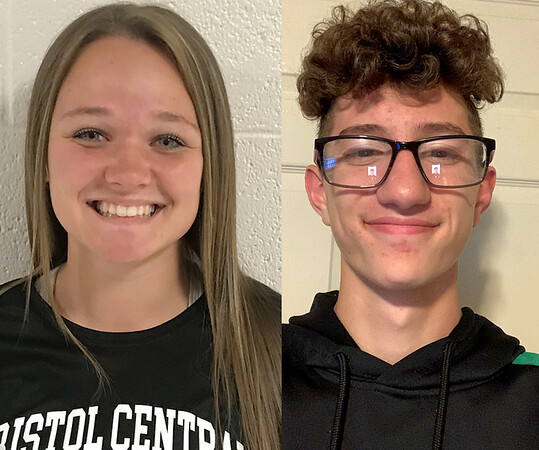 Two Bristol Central veterans have been chosen as the ‚ÄúAthlete of the Week‚Äù picks for area scholastic sports. They are senior Faith Roy, a defender on the girls soccer team, and junior Nate DeAngelo of the boys cross country team.

Roy, the daughter of Christopher and Melanie Roy, is coming off a knee injury and hoping to pick up where she left off as one of Central‚Äôs key defenders and players the past couple of season She‚Äôs one of the fastest players on the team and is a value on both defense and offense.¬Ý

‚ÄúFaith is often smaller than most of the opponents we face, but you never know it once she stops them dead in their tracks,‚Äù Bristol Central head coach Ginny Godbout said. ‚ÄúShe is fearless and protects the middle of the field with everything she has.‚Äù

With the season now half over, the Rams enter Monday‚Äôs game against Maloney with a 6-3-2 record, which Roy attributes to the team‚Äôs collective effort.

‚ÄúI think we‚Äôre doing really well this year, we have a lot of freshmen,‚Äù Roy said. ‚ÄúWe have a few freshmen who have stepped up.‚Äù

Of course, Roy offers plenty of versatility on the field with the ability to shine both offensively and defensively.

‚ÄúI play center-back,‚Äù Roy said. ‚ÄúI get assists and I bring the ball up the field sometimes. As one of the faster players, I usually get back on defense quickly.‚Äù

In looking to next year, Roy will play college soccer while also studying nursing. The two she‚Äôs looking at right now are Western and Southern Connecticut State universities.¬Ý

The selection of DeAngelo, the son of Scott DeAngelo and Nicole Churchill, comes on the heels of his first place finish among the CCC South schools at the CCC Championships meet at Wickham Park last Wednesday.

DeAngelo ran the race with a time of 16:30 to lead the Rams and finish fifth among CCC schools.¬Ý

The Rams finished with a 14-0 mark this fall in the CCC South and that includes 6-0 in the Patriot Division. DeAngelo knew his team would do well, but was a little thrown off by his personal results.

‚ÄúIt was actually a surprise [to win the individual CCC South],‚Äù DeAngelo said. ‚ÄúI was reaching for the top three. That was my goal going into it. I was feeling good, I was kicking and it was a good race overall. I was really excited about that.‚Äù

His coach, Tamara Stafford-Kirk, was pleased with his effort, too.

‚ÄúNate is a super talented and coachable runner,‚Äù Stafford-Kirk said. ‚ÄúHe puts in the work year-round and came into this cross country season with high goals. His time at Wickham Park is one of the fastest I‚Äôve ever had a boy run there. I‚Äôm really looking forward to seeing what Nate runs at the Class L [meet] and beyond. He‚Äôs got the mentality and determination to race very well over the next couple of weeks.‚Äù

The Class L meet is on Saturday at Wickham Park and Central will be among the favored schools. Last year the Rams were runners-up with DeAngelo placing first from Bristol in finishing 15th overall with a time of 16:55.

DeAngelo also hopes to qualify for the State Open that follows. Last year he was the first to finish for those from Bristol and Terryville, placing 36th with a time of 16:52.

Although he has another year left of cross country and two seasons each of both indoor and outdoor track, where he runs the mile and two mile, he‚Äôs planning to compete in distance running in college in two years. As far as studies go, right now he‚Äôs contemplating something in the field of law.¬Ý