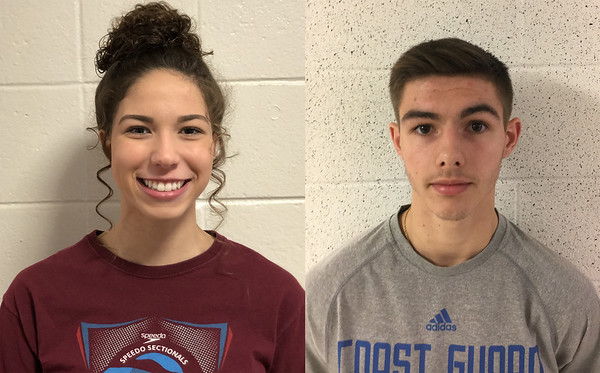 Two Bristol high school seniors who plan to continue playing a sport next year at the collegiate level share “Athlete of the Week” honors for area scholastic sports.

These standouts are Brianna Ogonowski of Bristol Eastern, a member of the school’s swimming and diving team, and three-sport athlete Kevin Ashworth, currently the quarterback of the St. Paul football team, who will play lacrosse in college next year.

Ogonowski, the daughter of Jason and Jennifer Ogonowski, is a four-year swimmer for the Lancers who capped off another successful year for her team.

She placed second in the Class M trials in the 100 breaststroke with a time of 1:08.95 in competition in East Hartford. She followed this at the Class M finals at Wesleyan with a clocking of 1:07.53, which broke her school mark and placed her fourth. This set her up for an appearance at the State Open at Yale, but not with a seed she had wanted.

“I wanted to get a top six (placement for) the Open, but got 14th,” Ogonowski said.

This seed came when all the times were listed in combining the different class races. When she went into the State Open she was dealing with health issues, which made it harder for her to breathe efficiently and with that she finished 24th. Despite that, Ogonowski says she had a good senior campaign. Last year she came in 19th with a time of 1:09.80 after setting a school mark of 1:07.93 in the event in Class L.

“I’m very happy with it,” Ogonowski said. “I worked very hard, got my best times and had a great time with the team. I loved the experience of being able to go to the Open two years in a row. It’s something I’m very proud of.”

In getting to where she is today, Ogonowski, who has won previous “AOW” honors from the Bristol Press, along with other honors such as All-Press and all-conference, started swimming competitively at the Dennis Malone Aquatic Center with the Bristol Splash.

“My sister [Georgia] started me,” Ogonowski said. “I went to her meets and really liked it. I joined Blue Devils Aquatics and then I went to Cheshire [the Y/Sea Dogs], because I wanted to swim more competitively.”

And that’s approximately 21 hours a week in the pool, plus driving time.

With regards to her sister, Georgia, a former Bristol Eastern swimmer, too, she now competes with the swim team at Nova Southeastern in Florida as a sophomore, specializing in the breastroke. Brianna Ogonowski will be swimming for Duquesne University next year while studying forensic science.

She offered advice for new swimmers.

“To always stay positive and keep working towards your goals,” Ogonowski said.

Ashworth, the son of Chris and Gina Ashworth of New Hartford, is the key to the St. Paul offense.

St. Paul is 4-5 on the season and will close things out for 2018 on Wednesday in its annual Thanksgiving matchup against Oxford, a school which also carries a 4-5 record this fall.

“He’s our field general,” coach Jude Kelly said. “He’s a third year quarterback who runs the wishbone and understands the concept like a coach. He’s a versatile athlete, so he’s able to run the football, throw the football, hand off to the halfbacks and fullbacks, and makes decisions with the option of what to do after the snap. He also plays defensive back and is our punter.”

With comments on him from his coach, Ashworth, who first took up playing football as a second-grader, talked about the team’s play this fall.

“From the beginning of the season we knew we had to be a great running team and pass the ball more,” Ashworth said. “We lost a lot of size from last year, so the emphasis with everyone is to emphasize playing with everything you have and through the whistle to complete your assignment. Without size, it’s in your heart. You can’t go into any game thinking you’re better than anyone.”

“It’s basically shaped out my entire life,” Ashworth said. “It’s taught me to be a better person and it teaches you characteristics you need in life, like working with others, being able to adapt to different situations, and just learning how to get coached.”

Ashworth, who has been all-conference in lacrosse and in football in 2017, leaves advice for the up and coming players.

“Hit the weight room,” Ashworth said. “That does a lot for you. Be coachable, listen to the advice coaches have for you and put everything into the game you love because it goes by fast.”

Next year, Ashworth says he will play the sport he is best at, lacrosse, at WestConn. His studies will encompass business management courses.