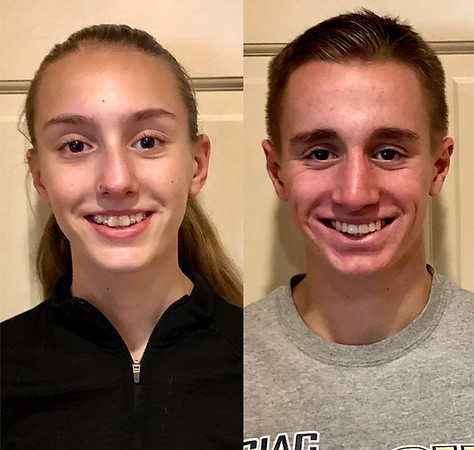 Since The Bristol Press started doing an ‚ÄúAthlete of the Week‚Äù story a couple of decades ago, siblings have been chosen on two occasions. Thus the selection of brother and sister, Christopher and Katie Deforest, creates another one of these rare weeks.

The children of Jennifer and John Deforest of Plymouth, the two run cross country for Terryville High as a freshman and junior class member, respectively. Last week, the pair both finished first for the Kangaroos in competing against host Northwestern and Wamogo at White Memorial in Litchfield.

Christopher Deforest finished with a time of 17:31 as he and his teammates beat Wamogo 15-50, while falling to Northwestern by a close 26-31 score. The Terryville girls fielded less than a full team and lost to the two visiting schools by a score of 15-50. Katie Deforest, however, claimed the best time in posting a 23:02.

This past Saturday, Terryville hosted and topped both Lewis Mills and Shepaug in boys and girls cross country with the boys winning twice with Christopher Deforest taking first against both schools with a time of 17:24.

‚ÄúThough quiet, Chris is a leader on our team,‚Äù Kangaroos co-head coach Stephanie Konopaske said. ‚ÄúNot only does he constantly strive to be the best he can be, he does everything in his power to push his teammates to their limits. He is unwilling to let anything get in his way. With his fierce competitiveness, he is going to do great things in the future.

‚ÄúKatie may not be so quiet, but she is a workhorse just like her brother. She has showed endless perseverance this year. Our small girls team means that Katie has to make the choice day-in and day-out to push herself and run with the boys. She is a fiery competitor and won‚Äôt take no for an answer.‚Äù

The brother and sister both began running cross country while in the fourth grade and that was with the club at Plymouth Center School.

‚ÄúI like how it‚Äôs a base for all sports,‚Äù Chris said of cross country. ‚ÄúIt gives you the athleticism you need. It‚Äôs a freedom type of thing. You go out for a run and it‚Äôs an escape from life.‚Äù

Their mother said Katie followed in her brother‚Äôs footsteps.

And running as a teammate has been good for her brother.

‚ÄúI feel like I‚Äôm a good role model for her,‚Äù Chris said. ‚ÄúIt‚Äôs just cool to have your sister on the team. Last year, I couldn‚Äôt see her run, so now I can.‚Äù

His sister added that having her brother on the team has been motivational and on the way home after meets and practices her brother shares tips in helping her to get better. And getting better is tied in with setting goals, which the siblings both have.

‚ÄúIt‚Äôs to do well in the Berkshire (League competition and championship) and be an all-star, also to be All-State once again.‚Äù Chris said. ‚ÄúI got seventh in [Class] SS last year and this year it‚Äôll be S. My best time to date is 16:58 and that‚Äôs from last year, and I‚Äôd like to get high 16:30‚Äôs or low 16:40‚Äôs.‚Äù

His sister also has goals of times and placements.

Both siblings will be doing both indoor and outdoor track. Chris has been doing both indoor and outdoor track and his sister will join him a as freshman. Katie previously played softball in the spring. Chris, who runs both the mile and two-mile, is looking for times of 4:30 and 9:30, respectively. His sister said she will likely compete in both the one and two mile, while also shorter runs.

And although Chris is a junior, he‚Äôs already thinking about the future.

School class records for cross country show the siblings listed a few times when looking at freshman, sophomore and junior timings. Chris is already among the school‚Äôs all-time best and his sister is on her way there.